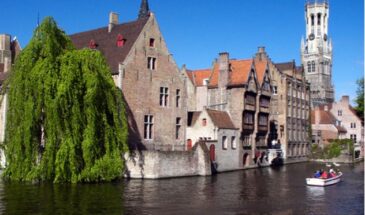 Experience the charm of a bygone era on this exciting 8 day, 7 night tour where you will discover the best of what Holland and Belgium have to offer. During the day you will cycle to world famous destinations such as Amsterdam, Dordrecht, Antwerp, Ghent and Bruges, while at night you will relax in the comfort of your floating hotel. Cycling on this tour is through the beautiful – and flat – Dutch countryside of Zeeland and the western Flanders region of Belgium. Attractions along the way include many charming villages, a visit to a real Dutch cheese farm, the 19 famous Dutch windmills in Kinderdijk and the world famous cities of Antwerp, Ghent and Bruges in the western Flanders region of Belgium. You will cycle through and discover the Dutch province of Zeeland, which is essentially one big river delta of the Rhine, Meuse and Scheldt Rivers famous for its fantastic beaches, water sport activities and Delta works and the Flanders region of Belgium famous for its medieval towns and a reputation for superb food and drink. 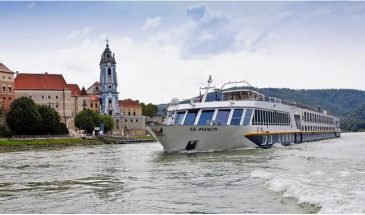 Accompanied by a cruise ship you cycle along Europe’s second largest river Danube from the charming Bavarian “Three River City” of Passau straight into the heart of the once glorious Imperial and Royal Monarchy. Enjoy three of the most enchanting European capitals: the lively Vienna, the Slovak coronation city of Bratislava at the foot of the Carpathian Mountains and Budapest, the “Hungarian Danube Queen”! By bicycle you discover the stunning natural spectacle of the Schlögener Donauschlinge (“Great Loop”), the legendary Wachau with romantic towns and mighty castles amidst lovely vineyards, the untouched alluvial forests of the Danube National Park, as well as the picturesque Hungarian Danube bend where the important cupola of the basilica in Esztergom salutes from the distance. The highlights of the tour: Passau, the City of Three Rivers, the Schloegen Danube Loop, the Hungarian Danube Bend, the World Heritage Site Wachau, the metropoles of Bratislava, Budapest and Vienna.

The Province of the Southern Netherlands: You are travelling through the green heart of the Netherlands. Hardly any province is more changing and many faceted than the Southern Netherlands. Big cities as well as untouched nature are so close to each other. The many waterways offer uncountable opportunities to discover the wonderful landscapes and culture historical highlights of the province “Zuid-Holland”. Experience such different cities like Dordrecht, Utrecht and Rotterdam, also known as the “Manhattan on the river Maas”. Beautiful landscape of Polderland, the famous windmill row of Kinderdijk and not forget the major porcelain manufacturer in Delft with its “Delfter Blue”. 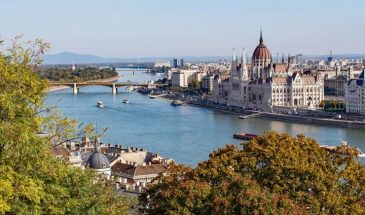 Accompanied by a cruise ship you cycle along Europe’s second largest river Danube from the charming Bavarian “three river city” of Passau straight into the heart of the once glorious Imperial and Royal Monarchy. Enjoy three of the most enchanting European capitals: the lively Vienna, the Slovak coronation city of Bratislava at the foot of the Carpathian Mountains and Budapest, the “Hungarian Danube Queen”! By bicycle you discover the stunning natural spectacle of the Schlögener Donauschlinge (“Great Loop”), the legendary Wachau with romantic towns and mighty castles amidst lovely vineyards, the untouched alluvial forests of the Danube National Park, as well as the picturesque Hungarian Danube bend where the important cupola of the basilica in Esztergom salutes from the distance.  The highlights of the tour: Passau, the City of 3 Rivers, the Schloegen Danube Loop, the Hungarian Danube Bend, the World Heritage Site Wachau, the metropoles of Bratislava, Budapest and Vienna.

From the metropolis of Berlin with its vast forests in the north, you will first sail to Schwedt on the Oder-Havel Canal, passing through Oranienburg and Eberswalde. The peaceful, unique beauty of the Oder landscape will accompany you to the Polish city of Szczecin with its magnificent castle. The river will then take you along the unique Bodden coast through Usedom to Germany’s largest island, Rügen, with its famous chalk cliffs. The old hanseatic city of Stralsund is the trip’s destination. What could be more wonderful than sitting on the sun deck and enjoying the splendid views of the landscape slowly passing by and finding out all sorts of interesting things about the country, people, culture and nature on lovely bike tours? Discover the varied flora and fauna of these unique fluvial landscapes, baroque castles, brick gothic and northern German seaside resort architecture.

Flat countryside up to the horizon, windmills, canals (Grachten) and cycling that are the Netherlands. And there is so much more. Discover the Netherlands in a unique way on an eight day journey by bike and boat. Well-built cycle paths as well as wide and extensive waterways guarantee an unforgettable holiday. Throughout the day you are cycling on your own through the beautiful landscapes in Rembrandt’s and Van Gogh’s country and in the late afternoon your swimming hotel MS Serena will be at your disposal. And if you don’t like to cycle every day, you can stay on board and enjoy the passing countryside. The province of the Northern Netherlands: The Dutch province of the Northern Netherlands is situated on a peninsula of the North Sea and the Ijsselmeer (Ijssel Sea). The Northern Netherlands was founded due to the separation of the north and south of the Netherlands in 1840.  Its capital is Haarlem, the biggest city is Amsterdam.  Discover the folklore and tradition in the flat Polderland, on the North Sea and in romantic ports. You travel through a former lake and marsh region that has been drained by the help of windmills since the 17th century. Experience varying, typically Dutch Polder countryside, dunes and the North Sea beaches, the North Sea island Texel and many picturesque harbour villages on the coast of the Ijsselmeer.

The history of this region even goes back to the Roman Era, some 2,000 years ago. Beautiful timbered houses, vineyards, the Porta Nigra in Trier, the “German corner” (conjunction of Moselle and Rhine) in Koblenz and Saarburg (also known as “little Venice”) are but a few of the highlights during this trip. The Moselle, with a length of 544 km, is the Rhine’s longest tributary and it is also the second most important shipping route in Germany. The Saar, which has the greatest abundance of water and a length of 246 km, is the Moselle’s longest tributary. 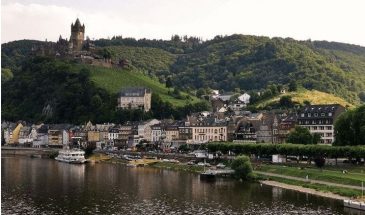 The countryside on both banks of the Moselle is splendid, the cool wines taste deliciously, the picturesque little towns have rich histories and the conditions for cycling are excellent indeed.  You follow the river Moselle, partly in Germany, partly in France and partly in Luxembourg, along the endless vineyards and the enchanting old cities like Cochem and Bernkastel. It goes without saying that you can taste the local wine as often as you like. Then, of course, there is Trier, once an imperial Roman city. You will see the remnants of this glorious past in Germany’s oldest cathedral, amphitheater, the emperor’s throne hall and famous “black gate”, the remains of the ancient city wall. After Trier you will follow the river Saar to visit charming Saarburg, with the stunning waterfalls in the city center. Then onto Luxembourg, the only Grand Duchy in Europe. Its strategic position between two super powers (France and Germany) made it a contested area to control over the ages. The last day you cycle in France with her welcoming villages, where the inhabitants are proud of their sweet, smooth wines and golden “Mirabellen” liqueur. The tour end in the city of Metz, with her splendid Gothic cathedral.

It doesn’t get any better than the Southern Tour of Holland on board your home away from home, the ship De Amsterdam or Poseidon. Not only will you get the chance to visit a number of famous Dutch cities, but you will also uncover another side of Holland as you cycle through the countryside – the country’s “Green Heart”. It is here that you will see a landscape of water, meadows, grazing cows, windmills and picturesque farms… it is a landscape that is impossible to feel or look any more Dutch. In short the Southern Tour is the perfect tour for anyone wanting to see as much of “typical” central Holland as is possible in one week. What you will come away with at the end of the tour is a greater appreciation of why this part of the Netherlands attracts so many visitors from all corners of the globe every year. 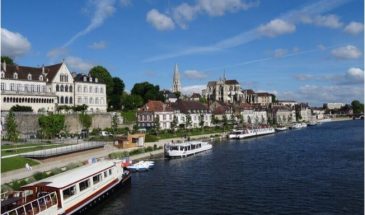 There is a very good reason why Northern Burgundy is referred to as “The Land of Good Living”, and if nothing else, once you complete this memorable boat and barge tour, we hope you understand why. If you’ve never seen Northern Burgundy you are in for a sensual overload of divinely beautiful countryside, ancient medieval villages, serene, meandering rivers and of course, some of the best wines, cheeses, honey and ciders in the world! Burgundy is known throughout the world for its laid-back pace of life, friendliness and mild climate. Both the cultural experiences of visiting wonders such as the gothic cathedral of Sens or the cities of art and culture of Auxerre and Joigny, and the biking itself which alternates between easy stretches of free-wheeling alongside the river Yonne and more challenging uphill sections that lead to spectacular views, will lea will leave you feeling enriched, enlightened and recharged.