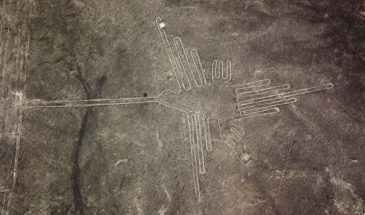 Along the Peruvian Pan-American Highway lies an only partially discovered coastal region where nature, colonial cities and ancient pyramid complexes exist in harmony. During this trip you will travel to Peru’s coastal highlights such as Lima, Paracas, Ballestas and Nazca. Here we will explore the ancient cultures and enjoy the unique nature and the friendly Peruvian people. Travel to some of Peru´s great highlights such as Arequipa and the Cusco and explore the Inca Culture.  End the trip with some days on a beautiful beach in the Northern Peru near Mancora and Talara. 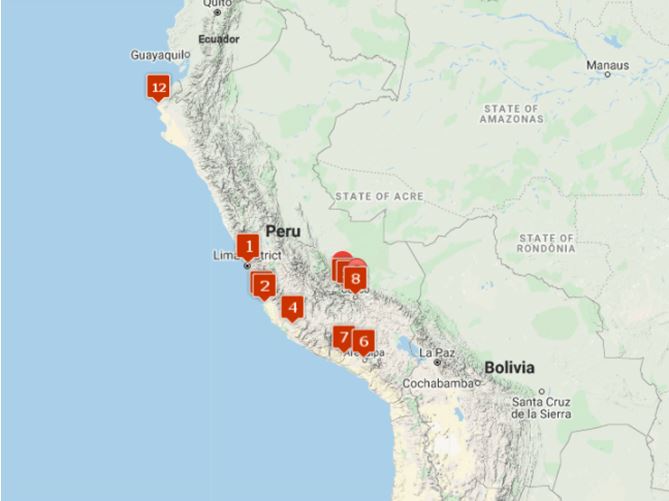 Route Profile:  Easy. Sightseeing and cultural activities designed for people who are generally fit and are comfortable walking up to 6 hours per day.  Short mountain biking tour on Day 3.

Travel Season: Any date on request from January 2 to December 31, 2023

*Group rates available for this tour.  As this is a guided tour, the pricing improves with more people participating. Please ask us for details.

3* and 4* hotels, haciendas and homestays

Along the Peruvian Pan-American Highway lies an only partially discovered coastal region where nature, colonial cities and ancient pyramid complexes exist in harmony. During this trip you will travel to Peru’s coastal highlights such as Lima, Paracas, Ballestas and Nazca. Here we will explore the ancient cultures and enjoy the unique nature and the friendly Peruvian people. Travel to some of Peru´s great highlights such as Arequipa and the Cusco and explore the Inca Culture.  End the trip with some days on a beautiful beach in the Northern Peru near Mancora and Talara.

Pick up at airport and transfer in to your hotel in Lima.

Transfer to the bus station in Lima. Travel to Paracas in tourist bus. Arrival in Paracas and transfer to hotel. Afternoon free to enjoy the area.

Morning boat tour to the Ballestas Islands. Pickup from hotel around 8 am. The morning tour is a two hour boat trip where we will visit the Ballestas Island. From the boat we can observe the wild life of Ballestas that consists of sea lions, tendrils, boobies, pelicans, penguins and more than 200 birds (migratory and endemics). During the trip we will pass by “El Candelabro”, which is an impressive figure painted in the sand and its origin (a well as the Nazca lines) is unknown. Remember to bring a jacket as the mornings can be chilly. Return to Paracas around 10:20. Around 11 am, after a short break for a coffee or snack, we will do another tour to visit the Paracas Natural Reserve by mountain bike. It’s a private tour with local guide. Visiting the desert by bike is absolutely the best way as the climate is warm and windy and it is relatively flat. Along the way there will be several photo opportunities and it is possible to observe flamingos and the beautiful desert landscapes. As it is a private tour, the length depends entirely of the participants and their physical shape. Return to Paracas by the end of the day.

Morning bus to Nazca. Check in to the hotel. After lunch, a private tour to the Cahuasi pyramids and the Catalloc Aqueducts. The Cahuasi were the capital of the Nazcas from 200 BC to 450 AC. It was a ceremonial place with great importance to the Nazca until it was destroyed by an earthquake and later covered with sand after a tsunami hit. Some of the pyramids have been restored while others are still being excavated by archaeologists. Afterwards visit to the Catallocs aqueducts. It is an impressive hydraulic system made by the Nazcas and its still being used for agriculture.

Morning flight over Nazca Lines (according to the weather conditions). The Nazca Lines are a group of impressive figures that were carved into the desert by ancient Nazca people. This overflight will allow us to film and photograph the Nazca Lines. After the flight, we take a visit to the Chauchillas cemetery, discovered in the 1920s. It is a necropolis consisting of mud-brick tombs and mummified remains belonging to the Nazca people, with interments that date between 200 and 900 AD. Though many of the mummies are at least 1000 years old, many still have skin and hair attached. The incredible preservation of these bodies is due to both the mummification process and the dry, arid environment of the Peruvian desert. Afternoon travel by executive bus to Arequipa. 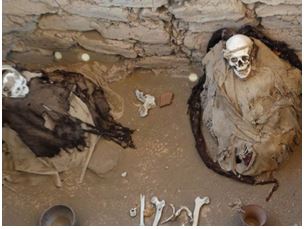 Arequipa the second most important city in Peru, known as the white city for the light colors of its colonial facades, due to the material extracted from “El Sillar” quarry. Also it has a reputation as a cultural hot spot, having many of the country’s best universities and cultural movements. In the morning the group will be picked up for a guided city tour in the well preserved colonial downtown. During the tour there will be a stop at the lovely “Plaza de Armas” (main square) to see some of the best examples of the beautiful architecture of its glorious colonial time. The cathedral is also worth a visit, being a great example of the Church’s wealth and power. The Jesuit “Compañia de Jesus” church’s quarters is a great colonial building in very good condition. There will be a visit to one of the most interesting religious places: The Santa Catalina de Siena convent, built in 1579 and considered the most important colonial construction in the city. Here women from different social backgrounds enter to follow a life of devotion and isolation, never to leave again. The convent is a city within a city and a good example of how social differences where present even in such a place, reflected in the private cells where the nuns lived. It is also a great religious art museum. The tour will visit, maybe the most interesting museum: “Museo de Santuarios Andinos”, which houses the mummy known as “Juanita”, the body of a sacrificed Inca young girl found in the summit of the Ampato volcano. The incredibly well-preserved state in which she was found, has been a great source of information for the scientists, plus all the archeological artifacts that surrounded her and the other mummies. There will be free time in the afternoon to enjoy the city, a good opportunity to walk around the streets and plazas in the historical district. The “Mirador de Yanahuara” is a perfect spot to end the day, watching the sun set from this vintage point overlooking the city and the Misti and Chachani volcanoes.

Full day tour to “Toro Muerto”. Pick up from the hotel in the early morning hours (5:30). Drive along the Pan-American Highway while enjoying the amazing vast desert landscape and the beginning of the Atacama Dessert. Stop during the way for a breakfast snack. After breakfast we will continue to the Toro Muerto’s Petroglyphs. We are entering a sacred place in the desert with more than 3000 petroglyphs from pre-Inca time made in the volcanic ignimbrite rock. The visit consists of a two to three hour desert walk with local guide where we will discover and discus the meaning of some the most interesting figures and drawings. After this visit we will continue to Querullpa, an area where dinosaur footprints were found and have a nice view of the valley among the sand hills as well. We will have our lunch (not included in program) in the town of Corire, where the dish specialty is based on fresh shrimp. Afternoon return to Arequipa.

Transfer to airport and flight to Cusco. Afternoon free to enjoy Cusco on your own.

Discover Cusco and the surroundings by a half day private city tour including visit to Qorikancha (Sun temple) and the Inca Ruins in the outskirts of Cusco: Sacsayhuamana, Qenqo, Puca pucara and Tambomachay. Afternoon free to enjoy Cusco town. 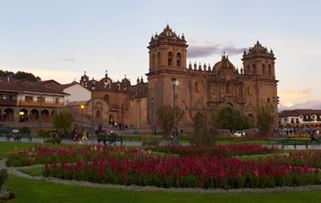 The Sacred Valley of the Incas contains many famous and beautiful Inca ruins. It was called the Sacred Valley because it contains some of the best land in the region and was not a part of the Empire but the property of the Emperor or Inca himself. On this private day tour, we will visit Pisac Inca Ruins, Pisac Indian Market, Urubamba valley and the impressive ruins in Ollantaytambo. Afternoon transfer to your hotel in Ollantaytambo.

Early morning transfer to the entrance to Machu Picchu. Here you will have a guided tour of three hours. Afterwards there will be some free time to explore the ruins on your own. Afternoon train back to Ollantaytambo train station. From here private transfer to your hotel in Cusco. 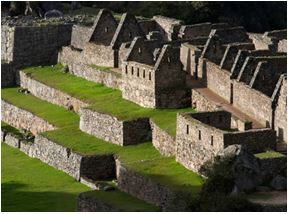 Transfer to Cusco airport and flight to Talara via Lima. From here transfer to your hotel at Mancora. Check in and time to enjoy the beach. Mancora is a quiet seaside village whose biggest claims are surfing, ceviche, and year round, sun drenched skies. A perfect spot if you’re looking for the good things in life without added fuss.

Free day to enjoy the beach.

Free day to enjoy the beach.

Transfer to airport in Talara. Flight to Lima and international connection. 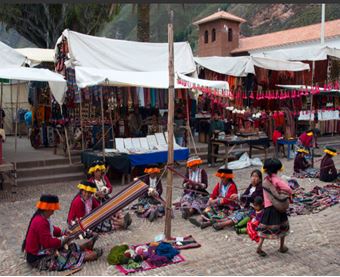