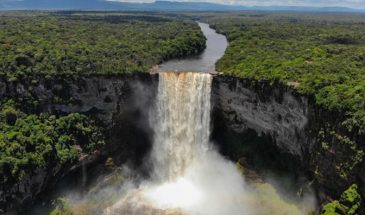 An adventure that includes a visit to Kaieteur Falls, the highest single-drop waterfall in the world by volume. Then head deep into the Iwokrama forest and explore the canopy from the walkway through the tree tops. Stay at the Atta Rainforest Lodge with forest trails and hummingbird garden. Experience the Machusi culture at Rewa and with indigenous guide climb mountains, explore the rivers and ponds and see amazing tropical wildlife. 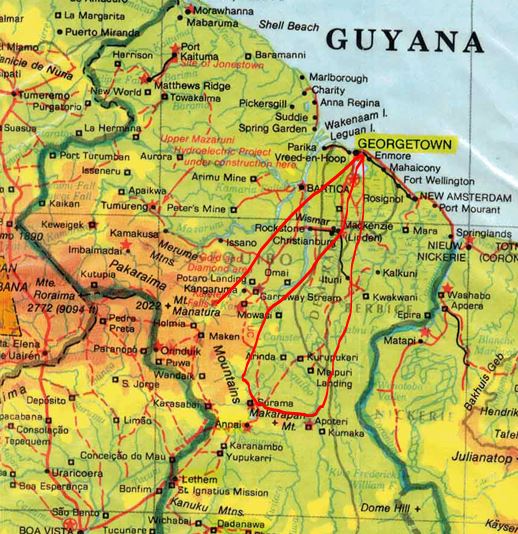 Travel Season: Departures on request from January 1 to December 31, 2023
Dry season occurs from January to April, and September to November

*Group rates available for this tour.  As this is a guided tour, the pricing improves with more people participating. Please ask us for details

An adventure that includes a visit to Kaieteur Falls, the highest single-drop waterfall in the world by volume. Then head deep into the Iwokrama forest and explore the canopy from the walkway through the tree tops. Stay at the Atta Rainforest Lodge with forest trails and hummingbird garden. Experience the Machusi culture at Rewa and with indigenous guide climb mountains, explore the rivers and ponds and see amazing tropical wildlife.

Pickup from Cheddi Jagan International Airport and transfer to Georgetown and your hotel, Cara Lodge.

From the Eugene F. Correia International Airport take a scheduled flight over the Demerara and Essequibo Rivers and hundreds of miles of unbroken tropical rainforest to land at Kaieteur Falls, the world’s highest free-falling waterfall. Kaieteur Falls which was first seen by a European on April 29, 1870, is situated in the heart of Guyana on the Potaro River, a tributary of the Essequibo. The water of Kaieteur, one of the worlds natural wonders, flows over a sandstone conglomerate tableland into a deep gorge - a drop of 247 feet or 5 times the height of Niagara Falls. There are no other falls in the world with the magnitude of the sheer drop existing at Kaieteur. Amerindian legend of the Patamona tribe has it that Kai, one of the tribe’s chiefs (after whom the falls is named), committed self-sacrifice by canoeing himself over the falls. It was believed this would encourage the Great Spirit Makonaima to save the tribe from being destroyed by the savage Caribishi. 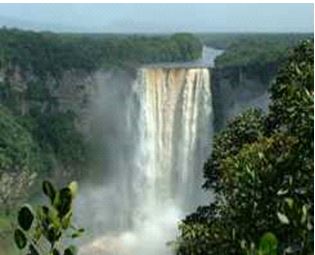 Pickup and transfer to Eugene F. Correia International Airport. Board schedule flight for journey over hundreds of miles of tropical rainforest to land at Fair View Airstrip. (Check in time 7:30 a.m., Departure 9:00 a.m.). Pick up from Fair View airstrip and transfer by 4 x 4 along the trail that is one of the best places to see the elusive Jaguar. No promises, but many have been lucky! Along the road, we will watch for the myriad of bird species that frequent the forest edge. This road is the only north – south access in Guyana and links the country to Brazil. Even so traffic is only very occasional and wildlife is often seen along the road, such as Agouti, Tayra, Tapir and Black Curassow. The journey concludes at the Atta Rainforest Lodge, home of the Iwokrama Canopy Walkway. The Iwokrama Canopy Walkway is situated near the southern boundary of the Iwokrama Reserve in central Guyana. The walkway has four suspension bridges leading to three platforms, the highest of which is over 30 meters above the ground. Another area where we will want to spend some time is the clearing around the lodge, as this is one of the best places to see another of Guyana’s “must see” birds, the Crimson Fruitcrow. The clearing is also a reliable site for Black Curassow as there is a large and growing family party which has become habituated to people and regularly passes through the clearing. 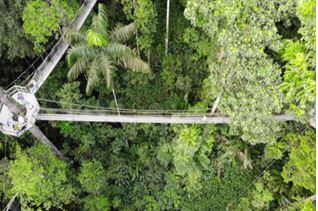 Before dawn we will return to the canopy where we can birdwatch easily and from this tree top vantage you can sometimes see red howler and black spider monkeys. Apart from the Iwokrama Canopy Walkway itself you can enjoy wildlife and birdwatching walks on the trails around the area. For those interested in botany many of the trails have the key tree species marked. Many bird species, stunning insects, noisy amphibians, and playful primates make the surrounding forest their home. Deer, tapir and agouti are also regular visitors to the lodge. Serious birders will want to search the undergrowth for the rarely seen rufous-winged ground-cuckoo. As darkness falls on the canopy walkway, you may see the white-winged potoo. Night walks are also possible and something interesting or new always seems to pop on to the scene including the occasional jaguar (panthera onca) along the transnational road near the lodge.

Welcome the dawn chorus from the canopy walkway and then return to the lodge for breakfast before departure. Transfer from Atta Rainforest Lodge through the rainforest to Corkwood in the Iwokrama Forest. Here there is a comparatively short trail to hopefully see the amazingly brilliant Guianan cock-of-the-rock. This trail is through interesting and pristine rainforest and the guides can explain how the plants are used for medicine and other purposes. Continue to Kwatamang Landing. Travel by boat along the Rupununi River with opportunities to see wild giant river otters and black caiman. You will pass locals fishing and bathing in the river until you reach the Rewa River and the Amerindian community of Rewa. The journey is approximately 80 kilometers by river and can be as short as two hours and as long as four hours depending on the water level. Rewa Village is located where the Rewa River runs into the Rupununi River in the North Rupununi. The surrounding area is rainforest, mountains and oxbow lakes and teeming with wildlife birds and fish. Once settled in take a walk over to the community of Rewa to see how the locals live. Visit villager’s houses where you can experience their everyday life and see activities such as grating cassava, weaving baskets and tending kitchen gardens. Later this afternoon take a short boat ride from the lodge to the opposite bank on the Rupununi River. Hidden after a five minute walk from the boat is a lovely oxbow lake. The magical setting is enhanced with a wooden deck out over the pond, allowing close-up views of the Victoria amazonica, the world's largest waterlily and the national flower of Guyana. The leaves that float on the water grow up to three meters in diameter with a submerged stalk of seven to eight meters. The flowers which bloom at dusk are white on the first night. By the third night, they change colour to pink and also change to a male flower. The golden colours across the pond at dusk combined with birds coming into roost provide a lovely nature experience. 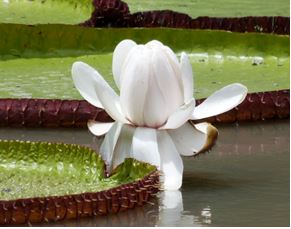 Enjoy breakfast at dawn overlooking the river. Then head out by boat along the Rupununi River, into an oxbow lake to begin a hike up Awarmie Mountain. The climb is steep in a few sections but in general not too difficult. Along the way, you may see lots of birds and perhaps good close up views of black spider monkeys. There is good birding along the trail with white bellbirds calling both from the scrubby woodland at the beginning of the trail and again from the forests far below you when reach the summit. Other species you may see include ornate hawk-eagle, black curassow, red-fan parrot, Guianan puffbird, Todd’s antwren, spotted tanager and bay-headed tanager. The area also has a high density of macaws including scarlet, blue-and-yellow and red-and-green macaws. There is a small plateau on the top of the mountain and in one direction, there are uninterrupted views back to the Rupununi River, some patches of Savannah and across to the distant Kanuku Mountains. In the other direction, there is a near vertical drop of at least 200 meters and the view is across great swathes of undisturbed forest to the distant Iwokrama Mountain and much closer, Makarapan Mountain. Makarapan is the oldest mountain in South America, if not the world, clocking in at an amazing two thousand million years old. Lunch at the bottom of the mountain. After lunch we return to the lodge. This afternoon we take a boat up the Rewa River and then a 15 minute hike to Grass Pond. This pond or lake is about three kilometers long and is a beautiful setting with Victoria amazonica. It has a good population of Arapaima, (reportedly the highest density in Guyana) the largest scaled freshwater fish in the world and you can also fish for peacock bass. During a late afternoon visit, you may see brown capuchin monkey or capybara. Birds likely to be seen include limpkin, wattled jacana, black-collared hawk, green kingfisher and Guianan puffbird. As dusk settles, watch the flower of the Victoria amazonica bloom. 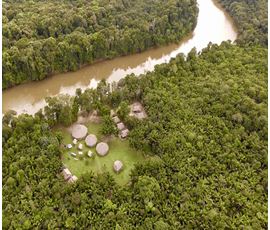 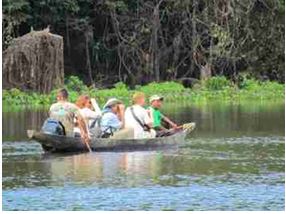 Pickup and transfer to Cheddi Jagan International Airport for your departing flight.