The cycle track “München-Venezia” joins pure leisure cycling with the adventure of traversing the Alps from Germany over Austria to Italy. On cycling paths, cycle routes or small side roads you will experience three countries with their various regions and lots of outstanding natural and cultural beauties. “München-Venezia” starts in the capital of Bavaria – Munich – and leads along Bavarian lakes and Tyrolean rivers through the UNESCO world natural heritage – the Dolomites – to Treviso and finally to the gates of the Serenissima – Venice – with its doges palaces and famous canals. 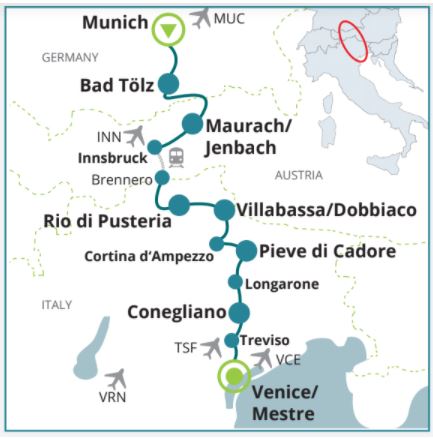 Route Profile: 9 day tour Medium.  12 day tour Easy. The cycling tour from Munich to Venice is a very varied tour. The most demanding stages over the Alps (Innsbruck–Brenner) can be shortened by train or bus and the stage from Dobbiaco to Cortina d’Ampezzo leads easily along the cycle path on the old railway trail. The last two days are downhill and flat towards the sea.  The tour is suitable for children over 16 years.

The cycle track “München-Venezia” joins pure leisure cycling with the adventure of traversing the Alps from Germany over Austria to Italy. On cycling paths, cycle routes or small side roads you will experience three countries with their various regions and lots of outstanding natural and cultural beauties. “München-Venezia” starts in the capital of Bavaria – Munich – and leads along Bavarian lakes and Tyrolean rivers through the UNESCO world natural heritage – the Dolomites – to Treviso and finally to the gates of the Serenissima – Venice – with its doges palaces and famous canals.

Individual arrival to the first hotel in Munich.

You leave Munich along the river Isar and will find yourself in the midst of untouched nature landscapes and dense forests. You will cycle past abbeys, bavarian villages and across the Isar wetland you reach Bad Tölz, a picturesque old town.

Also today you will follow the Isar River until you reach Lake Sylvenstein. Cycling through the Karwendel nature park you pass the German Austrian border, arriving to the holiday destination Achensee and its mountain lake “Achensee”. Go for a boat trip on the lake before continuing your way down to the Inn valley and ending your stage in Maurach/Jenbach.

From Jenbach you cycle on the cycling path - the river Inn along – into Tyrol’s capital Innsbruck. Visit the historic city with its famous “Goldene Dachl” (Golden Roof) or go on an excursion on Mount Isel with its ski-jump or the Tirol Panorama. The demanding part from Innsbruck to the Brennero pass, border between Austria and Italy and at the same time watershed and cultural axis, will be done by transfer (train or bus). Only a few buildings remind of the former border between the two European countries. From the Brennero you cycle along the old railway track to Vipiteno and further on to Fortezza and Rio di Pusteria.

From Rio di Pusteria a well-built cycling path leads you through the Val Pusteria, passing the Mühlbacher Klause, a former border post. Once it was an antique gate between the provinces Rätien and Norikum. Along the river Rienz you will arrive to Brunico. We suggest a visit of the Volkskundemuseum (South Tyrolean Folklore Museum) in Teodone or one of the two Messner Mountain Museums MMM in the castle of Brunico or on the Kronplatz Mountain. From Brunico you cycle along the cycling path along the river Rienz to Villabassa or Dobbiaco, where you will spend the night. After having spent a lot of time on your bike until here, we offer you a free pit stop at our shop in Dobbiaco for a checkup on your bike (only valid for our rental bikes).

From here you follow the cycling path on the old Dolomites railway trail passing Lake Toblacher See and the War Cemetery reminding of the World War I. Shortly after, you will admire a unique view on the world famous Drei Zinnen (Three Peaks) before arriving to Lake Dürrensee. Slightly steep the cycling path leads to the border of the two provinces Bolzano and Belluno. From now on you roll comfortably downhill towards the south to the pearl of the Dolomites, Cortina d’Ampezzo with its astonishing mountain scenery. Today is slightly downhill again, a large part still on the old railway trail – on your left the massif of Sorapis, on your right the massif Cinque Torri (five towers). Through the Boite Valley you cycle south to Pieve di Cadore.

From here you will cycle on the new cycling path to Longarone. This town was completely rebuilt in 1963 after a landslide at the former Vajont dam above the village which caused a huge flood. From Longarone you cycle on to Conegliano.

You leave the Alps behind and arrive to Treviso, city of waterways and fashion. On your way you can admire numerous villas from the Italian master builder Palladio, who was able to complete his magnificent buildings under the influence of the leading European sea power Venice. The River Sile remains your faithful companion in the direction of the Adriatic Sea to Venice mainland/Mestre from where you can start your exploration of the “Serenissima”.

Individual departure or possibility to extend your stay.