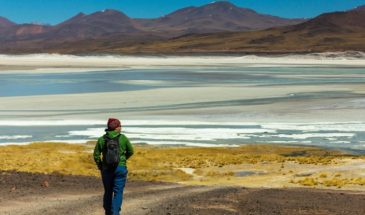 We have developed this new hiking tour in Atacama Desert for people who love walking during the day and resting comfortably at night in a hotel or hostel in San Pedro de Atacama. You’ll hike among astonishing landscapes surrounded by volcanoes and secret paths between valleys, salt flats, gorges, in addition to learning about Atacama history, culture, archaeology, and its native flora and fauna. 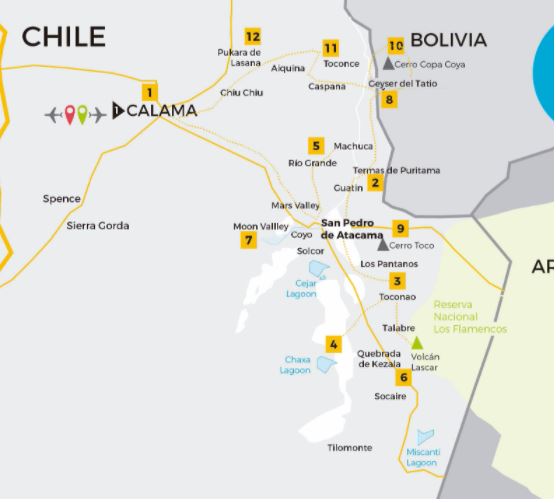 Route Profile:  Medium, designed for people who lead active lives and are comfortable participating in up to [5] hours of physical activity per day. Programs at this level generally involve some activities of higher intensity and/or a more vigorous pace.

We have developed this new hiking tour in Atacama Desert for people who love walking during the day and resting comfortably at night in a hotel or hostel in San Pedro de Atacama. You’ll hike among astonishing landscapes surrounded by volcanoes and secret paths between valleys, salt flats, gorges, in addition to learning about Atacama history, culture, archaeology, and its native flora and fauna.

On our first day, you will meet your team of local professional guides at Hotel Casa de Don Tomás, at 2 pm. They will go over all logistic details and help you fit your hiking gear to your satisfaction. Make sure you arrive to Chile and the Atacama Desert with at least one day in advance. After the introductory briefing we’ll head towards the Salt Mountain Range where the Mars Valley is located. This mountain range forms a natural barrier between the Pacific Ocean and the Atacama Salt Flat. We´ll drive 20 minutes from your hotel until we arrive to our starting point. After ascending a small dune, we will hike north along one of the cornices bordering the Mars Valley. The stunning panoramic view allows us to appreciate how erosion has molded the Salt Mountain Range, revealing the geological processes that shaped it. The most fun part of the excursion is a steep but enjoyable descent down a dune, from where we cross the valley on our way back to the van. At night we will enjoy a welcome dinner at a restaurant in town.

Morning Hike: After breakfast, departure from your hotel by van (30 minutes) on the road towards the North East. The excursion starts out by ascending from the Guatín settlement. The hike begins climbing along at 273 meter slope towards the Puritama hot springs. The trail passes through ancient settlements and hundred year old cactus; the terrain is rocky at times. Once we reach the hot springs we will relax in mineral hot water and enjoy snacks. Return to San Pedro. Lunch on your own.
Afternoon Hike: In the afternoon we will departure from San Pedro to the town of Toconao. Once here we will visit the main plaza, the church and the historic bell tower, all of them historic symbols of this town. After we will make our way towards "Reserva Nacional los Flamencos", where the Atacama Salt Flat is located and bird watching is amazing. This National Reserve is formed by a gigantic depression of more than 3, 500 km2, located at a height of 2,300 meters. The Salar is the biggest salt field in Chile and its large quantities of salt make the surface white and rough. The dryness and altitude of the salt field allow an excellent panoramic view of the area. The bottom of the salt field is composed of an enormous lake, which receives water from mountain rivers and melting snow. 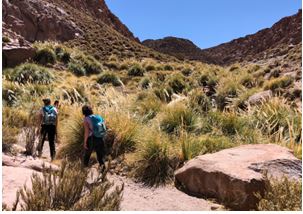 In the village of Machuca, situated 4,000 meters above sea level, the hike begins with a descent through a desert moor towards the gorge, passing through lands used by shepherd caravans. We will be stopping for lunch mid-way through the hike at an abandoned homestead called Peñaliri. After lunch, we continue hiking downriver until we reach the village of Río Grande, where the van will be waiting to take us back to our hotel in San Pedro de Atacama. Evening at leisure. Ask our guides about restaurant recommendations and enjoy a dinner on your own.

Morning Hike: In the morning we will drive for about 45 minutes towards Talabre, a little charming village located on the base of the Lascar Volcano. Here we will hike through the Kezala Ravine. The large quantity of petroglyphs located in Quebrada de Kezala attracts attention, with different naturalistic representations ranging from camelids, hunting animals, birds, felines and foxes, to anthropomorphic motifs. Later, we’ll return to San Pedro for a lunch break (lunch on your own). Afternoon Hike: After lunch we will drive towards the Salt Mountain Range. This range was formed in the Oligocene geological period, marked by the mass extinction of living species, probably caused by a meteorite. The area became arid and rainfall was blocked by the Andes in the east and by the coastal range in the west. It is possible to find huge natural sculptures that have been eroded by wind, sun and rain over millions of years. The sand grains carried by the wind and the riddle minerals, have bitten and pierced the small alveoli and slowly shaped the landscape. This range is mostly made by of salt (sodium chloride), gypsum, borax, anhydrite and clay. Traces of various volcanic minerals can also be found. Stratifications and colorations depend on the diversity of its minerals. The hike starts at the Coyote rock, a strange rock formation and getting deep into the mountain range and its geologic forms. We’ll hike two hours by the Kari George located in the Moon Valley, admiring beautiful views of Atacama. The Moon is well known due to it statuesque and rocky formations. Salt emerges to the surface, covering the surface with a dry, whitish layer that gives the place a lunar aspect. Return to San Pedro de Atacama, dinner on your own and overnight.

Hike around the Tatio Geysers 9 km

Today we’ll set off at 8 am and drive in the van towards Tatio Geysers which are found at about 4,350 meters. They are shaped by a series of fumaroles that erupts water and steam of volcanic origin. We will start our hike from the geothermal field walking around the Copa Coya hill. This hike follows old "rutas Llareteras" offering a variety of sights and scenery for those who want to have another point of view of Tatio Geysers area. Very nice hike with variety of views and landscapes, finishing it with a well-deserved lunch in the location of the steam columns. Evening at leisure, dinner on your own. 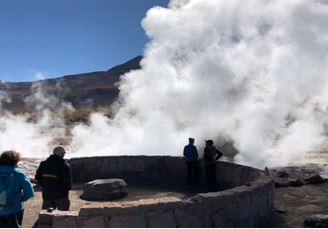 Cerro Toco is an ancient dormant volcano like several others in the area. It is one of the most characteristic ascents in the area, because it is the nearest to San Pedro de Atacama, just at 60 km, and easy to access. We will drive from our hotel towards an old sulfur mine for about 1.5 hours. Once there, at 5,000 meters high, we will begin our ascent that will take us to the summit at 5,600 meters above the sea level. Once on the summit, we will enjoy the spectacular views to the Andes Mountain Range. Our descent lasts one hour. We will drive back to San Pedro de Atacama. Lunch on your own.
We'll eat our farewell dinner in town, followed (around 10 pm) by enjoying an amazing astronomy outing. We'll spend two hours, starting with an astronomy lecture in a specially equipped room, followed by a naked eye star gazing and finally, a celestial bodies telescopic observation. 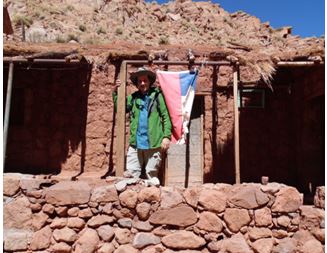 Sadly, it is time to say good bye. After breakfast a private transfer will take you to Calama airport. End of the services 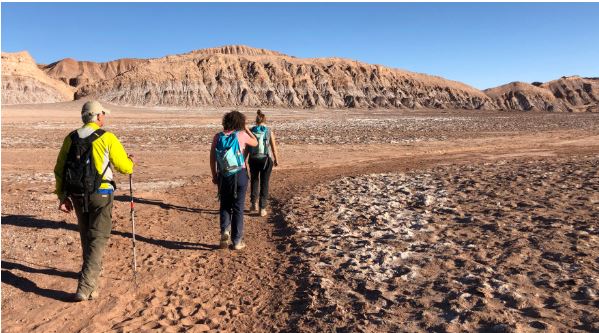