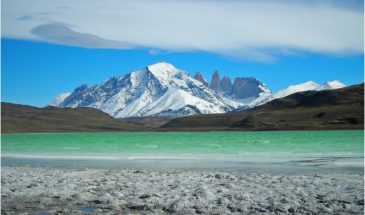 Specially designed for trekking and nature lovers, this program takes you to the deep Patagonia to see one of the most fascinating icons of Argentina and South America: Los Glaciares National Park, with its big star Perito Moreno Glacier. See and hear the constant breaking of the glacier and have the once in a life opportunity to walk on ice! Known as the “trekking capital” of Argentina, visit El Chaltén, this lovely village surrounded by glaciers and mountains, most famous one is Cerro Fitz Roy. Here you can choose to do several different trekking tours with different level of difficulty, suitable for everyone! This tour finishes in the great city of Buenos Aires, worldwide famous as “Paris of South America”, so eclectic and passionate combining French architecture, history and culture in every corner and the traditional Tango music and dancing, a must see while in town! 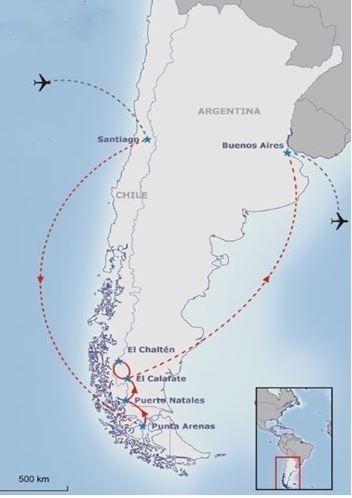 *Group rates available for this tour.  As this is a guided tour, the pricing improves with more people participating. Please ask us for details.

Variety of 3* and 4* hotels all with private facilities

Specially designed for trekking and nature lovers, this program takes you to the deep Patagonia to see one of the most fascinating icons of Argentina and South America: Los Glaciares National Park, with its big star Perito Moreno Glacier. See and hear the constant breaking of the glacier and have the once in a life opportunity to walk on ice! Known as the “trekking capital” of Argentina, visit El Chaltén, this lovely village surrounded by glaciers and mountains, most famous one is Cerro Fitz Roy. Here you can choose to do several different trekking tours with different level of difficulty, suitable for everyone! This tour finishes in the great city of Buenos Aires, worldwide famous as “Paris of South America”, so eclectic and passionate combining French architecture, history and culture in every corner and the traditional Tango music and dancing, a must see while in town!

You will be welcomed at the airport and driven to your hotel in Santiago. Santiago de Chile is a dynamic and cosmopolitan capital. The city’s diversity shines through its contrasting neighborhoods. Explore the streets and discover beautiful and original art galleries, design shops, handicraft markets, as well as a great selection of restaurants, bars, cafes, and nightlife. Learn more about the country in its great museums, wandering around the Central Market for a gastronomic experience, or escaping to the nearby mountains for fantastic views.

You will be picked up from your hotel and driven to the meeting point. This bike tour shows you our idiosyncrasies, popular culture and everyday life in Santiago. Multiculturalism, urban art and diverse religions in Patronato; fruit and vegetables in La Vega Market and history in the Plaza de Armas; are all part of the many experiences on this unforgettable tour of Santiago, Chile. 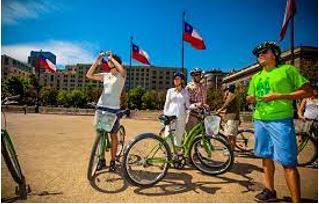 You will be picked up from your hotel and driven to the Santiago airport. You will be welcomed at the airport and driven to your hotel in Punta Arenas. In Punta Arenas, enjoy a city tour of the southernmost continental town of South America. It was founded in 1848 on the shores of the Magellan Strait. Start the tour along Independence Avenue and see many historical monuments. From the top of Cerro La Cruz, appreciate a sweeping view of Punta Arenas’ colorful roofs, the Magellan Strait, and “Tierra del Fuego” Island. Then, drive through town and stop at the Salesiano Museum. Managed by Salesian monks, appreciate the photography exhibition that shows life in Patagonia, indigenous communities, tools, and the Patagonia’s birds and animals. Punta Arenas is the gateway to Antarctica and many other captivating adventures in southern Patagonia: take a boat or kayak along the Magellan Straits to see the penguin colonies, hike and discover the unspoiled nature, or discover the region’s indigenous communities. Don’t miss a walk around the unique cemetery where historical personalities were buried. In the main square, a statue is waiting for you to kiss or touch its feet: locals say this means you will be back. 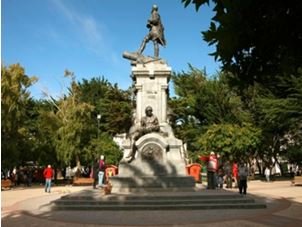 You will be picked up from your hotel and driven to Torres del Paine hotel (337 kilometers). Torres del Paine National Park boasts jaw-dropping landscapes filled with turquoise lagoons, glaciers, and towering granite horns. Become one with nature as you immerse yourself completely into its beauty on a trekking adventure, the best way to explore the UNESCO Reserve. Sail on Grey Lake to admire the glaciers, or paddle a kayak around its colossal blue and white icebergs. Don’t miss the sunrise that paints the sky with purple and red, or the nights that fill the sky with bright shining stars. 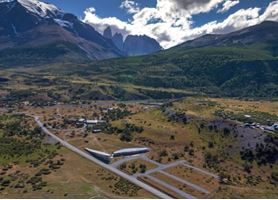 Today you can choose among the excursions offered. See PDF for details.

Transfer from your hotel to the bus station of Puerto Natales where you board a public bus to El Calafate. Upon arrival, you will be welcomed at the El Calafate bus station and taken to your hotel. El Calafate is a pleasant village located on the southern shore of Lake Argentino, about 80 kilometers from Los Glaciares National Park, a UNESCO Natural Heritage Site. Its strategic location between el Chaltén and Torres del Paine in Chile make it a great stop for Patagonian explorers and travelers. The town’s developing center boasts many hotels, restaurants, cafés, and chocolate shops. Visit the first museum dedicated to glaciers and ice and explore the Perito Moreno Glacier, a breath taking natural beauty 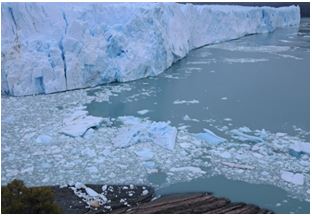 From El Calafate, drive approximately 73 kilometers towards the “Bajo de las Sombras” Bay. Take a 20 minute boat ride and appreciate the spectacular views of the Perito Moreno Glacier’s front wall. Disembark on the opposite shore and get ready for your small trek on ice. Get your crampons on and walk on the ice for approximately two hours. Enjoy this special contact with glacial ice and the unique azure color lakes. During your trek, enjoy the spectacular views of the glacier and learn about basic glaciology. End this activity with a toast, with your drink cooled with ice from the glacier! Once the walk has finished, a path through the amazing Magellanic forest will lead back to the shelter. Back at the port, a navigation to approach to the glacier’s wall begins, allowing you to have a different perspective of it. The program includes a 45 minute visit to the Glacier’s catwalks. Afterwards, drive back to El Calafate. 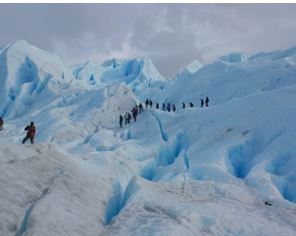 At the determined time, you will be picked up and taken to the bus station for your next destination. Arrival at El Chalten and rest of the day at leisure.

Day at leisure
Optional: Trekking to ''Laguna de los Tres'' 8 – 9 hours
From Hostería El Pilar, ascend for about 20 minutes and arrive at the Vueltas River Valley viewpoint. See the perfectly shaped “U” valley that was carved by the Patagonian glaciations. Continue an easy ascent to the Fitz Roy viewpoint and admire the peaks of the nearby mountains: Saint Exupéry, Poincenot, Fitz Roy, Mermoz, and Guillaumet. Afterwards, trek through the beautiful lenga forest, home to many birds. Reach the White River base camp, a key spot for adventurous climbers who attempt to summit these granite masses. After a 400 meter climb, arrive at the “Laguna de los Tres”, the path’s highest point. Walk around the shimmering blue lagoon and head towards the “Laguna Sucia” viewpoint to see its glacier and admire the impressive, unforgettable Patagonian views. After a break and some box lunch (optional surcharge, not included), start to walk back towards El Chaltén, passing by the photogenic Capri Lagoon. 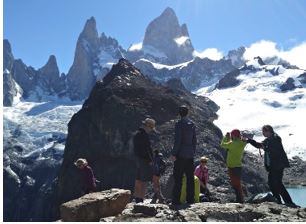 Day at leisure
Optional: Trekking to Torre Lagoon 7 – 8 hours
Hit the trails on one of the classic routes in El Chaltén. Take the path through the ñires forest and reach a viewpoint where you can see the river canyon and the Margarita waterfall. From the Mount Torre viewpoint, appreciate the spectacular landscapes with views of Mount Torre, the Adela range, and the glaciers. Take a short break here before continue your trek through lenga forests, crossing old glacial moraines and wet plains. In springtime, see a large variety of endemic wild flowers. Keep your eyes open and spot different types of birds like the Magellanic woodpecker. When you arrive at Torre Lagoon, see enormous icebergs that have fallen off the Torre glacier. Explore other viewpoints like the Maestri viewpoint, and the De Agostini base camp, used by mountaineers from all around the world. After a break, start hiking back to El Chaltén. 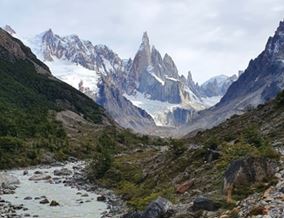 You will be taken to El Calafate airport on regular bus. Upon arrival, you will be welcomed at the airport and taken to your hotel. Buenos Aires is the land of tango, the country’s capital, as well as its political, economic, and intellectual center. Located on the western shore of the “Río de la Plata”, the cosmopolitan city is filled with modern constructions while preserving old traditions, fascinating art and antiques, colonial architecture, and many charming corners. Visit its numerous museums, shops, boutiques, parks, golf courses; and at night, experience the buzzing nightlife at tango bars, discotheques, and restaurants.

Meet your guide and the group at San Martín Square. After the general safety instructions, get on your bike and tour Buenos Aires on this fun and unforgettable experience. Choose between two different circuits: the Recoleta/Palermo Area, or the “Buenos Aires Diferente”. There are daily departures at 9:30 a.m. and 2:00 p.m. During the Recoleta/Palermo Area tour, leave San Martín Square and see landmarks such as: the Law University, National Library, Buenos Aires Zoo, Palermo Woods, several parks, and the San Martin Institute. Make a 30 minute stop at the Recoleta Basilica and Cemetery and continue along Alvear Avenue to return to San Martín Square. While visiting Buenos Aires, watching a tango show should be on your bucket list. The transition started at the end of the 19th century and combines various rhythms. Originally from the poorer districts and only danced by men, the music included flutes, violins, and guitars. Later on, the flutes were replaced by the "bandoneón" (a type of accordion), which gave tango its distinctive flair and brought great musicians such as Astor Piazzolla and Anibal Troilo. Leave your hotel and head to one of the city’s tango houses, indulge in exquisite food, and enjoy a live tango show. After the show, return to your hotel around midnight. 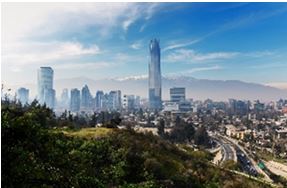