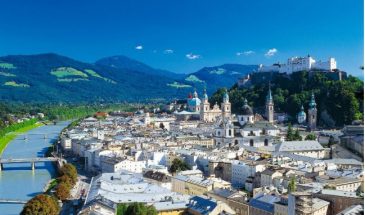 From the Alps to the sea! An inter-cultural composition consisting of Austria‘s impressive Alpine region and Italy‘s southern flair. On your bike you simply experience more: more romantic rivers and roaring waterfalls, more pretty historic town centres and defiant castles, more craggy mountain peaks and of course an increase in scenic, architectural and culinary delights. And last but not least: the Adriatic Sea. 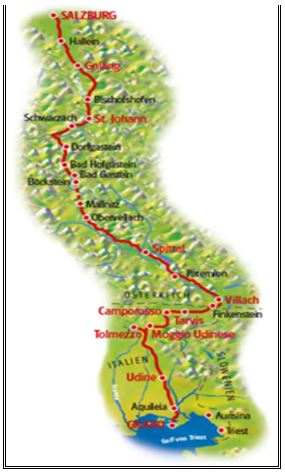 Route Profile: Medium. You mainly cycle on well-developed cycle paths and quiet side roads. Only a few sections lead you also along roads with heavier traffic or on dirt paths. Overall the route leads you on slightly hilly terrain, the most challenging section between St. Johann and the Gasteiner Valley can also be completed and bypassed by train.

From the Alps to the sea! An inter-cultural composition consisting of Austria‘s impressive Alpine region and Italy‘s southern flair. On your bike you simply experience more: more romantic rivers and roaring waterfalls, more pretty historic town centres and defiant castles, more craggy mountain peaks and of course an increase in scenic, architectural and culinary delights. And last but not least: the Adriatic Sea.

Individual arrival in the festival, Mozart and cultural city of Salzburg. Winding alleyways and squares invite you to take a stroll and languorous cafés entice you to sample genuine Austrian café specialties. You live and breathe culture and history literally with every step you take.

Out of Salzburg and head off south. You cycle along wetlands in the shade along the Salzach River to Hallein, a formerly wealthy Celtic town due to salt mining. Hallein surprises with a romantic historic town centre including little alleyways, archways and opulent house fronts. Past the roaring waterfall you pass Golling and continue along the well-developed cycle path onwards to St. Johann. Distinctive – just like twin peaks – the steeples of the Pongau cathedral rise. 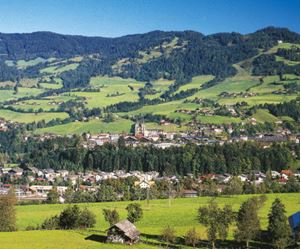 Shortly after Schwarzach you bid farewell to the Salzach River, from today onwards the Gasteiner Ache leads you through the wild romantic Gasteiner Valley. Via Dorfgastein and Bad Hofgastein you cycle into the renowned spa and ski resort Bad Gastein situated at the foot of the Hohen Tauern mountain chain, offering a variety of natural history and architectural sights. The Gasteiner waterfall is the landmark situated in the centre of town, which has been the focal point of many artists and poets. Now it is only a short distance to Böckstein, where a train takes you in only 10 minutes through the ‘Tauernschleuse’ to the other side of the Alps to Mallnitz. Back on your bike you enjoy the speedy descent to your hotel in the Mölltal Valley.

Initially you cycle along the Möll River through the impressive alpine landscapes today. The Drautal Valley starts in the village of Möllbrücke and hence the sunny south of Austria. Nearly effortlessly your bike rolls in a slight descent along the river Drau. In Spittal you get to visit the Renaissance palace ‘Porcia’ – sometimes called the ‘most beautiful Renaissance building north of the Alps’. Just a bit more pedalling and soon you have reached Villach, with its enchanting old part of town, southern flair and inviting pubs and restaurants. 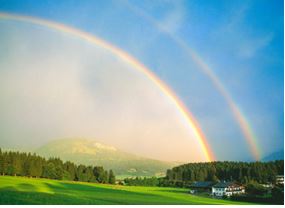 You bypass the ascent to Tarvis by train. In Italy too the cycle paths are well-developed and so you cycle leisurely downhill through the Kanaltal Valley and from your bike get to marvel at the beauty of the Friulian alpine region with its intact, unspoilt nature and extensive forests. Your days end is one of the picturesque villages located at the foothills of the Julian Alps.

At the southern exit of the Kanaltal Valley is the location of one of the most beautiful historic villages of the Friulian Julian Veneto. The focus of the village of Gemona del Friuli is the majestic cathedral Santa Maria Assunta and will blow you away. En route to Udine you come across the first vineyards and vines along the cycle route. Once you arrive in town feel and experience the ‘dolce vita’ over a coffee enjoyed on the ‘piazza’ or during a stroll through the alleyways whilst marvelling at the late Gothic and Renaissance architecture. 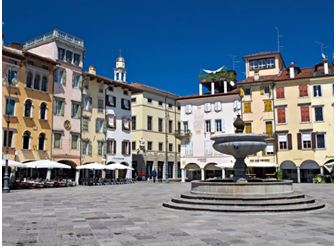 Feel the warm breeze of the sirocco! You cycle through vast reed scenery and along little water canals towards the Gulf of Venice. In the Roman city of Aquileia, the so-called ‘second Rome’, we recommend you definitely plan a break before reaching the end destination of your holiday. One of the most popular Adriatic beach resorts, the historic little fishing town Grado, will not only excite you with the extensive sandy beach, but also the historic harbour and the narrow alleyways with lovely restaurants all ooze Italian flair. 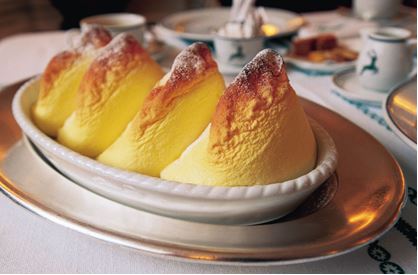